Department of Disorders in Zanzibar Abeida Rashid Abdalah said that social media is very potentially special to the Disorders because it used to provide important services for their life.

But also, Training about the Digital Accessibility for Disorders and social media influencers, also there must be research about the internet and its usage said Abeida

At the same point Chief executive Officer of Zaina Foundation, a Non- Government organization that organized the workshop under Internet Freedom Africa 2020 #FIFAfrica20, Zaituni Njovu said that Disorders they have to be aware of cybersecurity and effective use of social media that will be helpful to them to access information and enjoy Democracy particular in this election session

“Therefore they haven’t be considered as disorders, they need to use this digital services and internet, they need to access information about the election that will make them have a positive decision during election polling said Njovu

When a woman humiliated in social media, we have to be the first to oppose the situation and to ensure that the post is deleted and nit shared, they have to be pained when a fellow woman is humiliated” said Mkaanga

Anord Ernest Mlay a programmer from an institution for widows defendant TAWIA, said that the Men’s they have to be in front to avoid women humiliation in social media, including raising awareness for Cyber acts and to improve gender equality society

Initially, the Workshop started for Zaituni Njovu a Zaina Foundation CEO, to brief members about the programs whereby she said that Zaina foundation aimed to promote Digital Rights in Tanzania through raising awareness on access to information, Freedom of Expression, translation of circumvention digital tools, and Digital Security awareness to women journalists, she added that Zaina Foundation succeeded to train women about Internet and cybersecurity special Women Journalists,

“We are promoting digital rights and digital security awareness and for this session, we put many efforts to women Journalists” Said Njovu

After that safe sisters fellow to run a discussion about social media, media laws, internet challenges, and the solution to the challenges, whereby Neema ole Ndemno Said that the patriotic system in society it’s an obstacle to women and cause digital threats

Also in his presentation Door of Hope Tanzania CEO Clement Mwombeki said that peoples they have to stop ignoring internet services, and they have to put much consideration because the Internet became one of the basic need.

“Am Emphasizes that internet nowadays is a basic need of the human life it’s like food, health services water and others needs including human rights,” said Mwombeki

On his l presentation Godwin Asenga and Antony Alfred from Zaina Foundation Lectured about Digital Rights and cybersecurity and the use of VPN as an alternative once the partially internet shutdowns or social media blackout happen he insisted people to install that key in their phones. He insisted on the use of Tor browser and OONI for internet measurement during censorship. 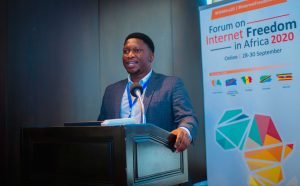 Finally, enclosure of the workshop Ibrahim Sammatta congratulates Zaina Foundation for being one among the organization that Promotes Digital Rights in Tanzania and trains women about Cyber Security and effectively internet usage. He thanks CIPESA for trusted Zaina Foundation to host Tanzania Hub as part of the Forum on Internet Freedom in Africa 2020.